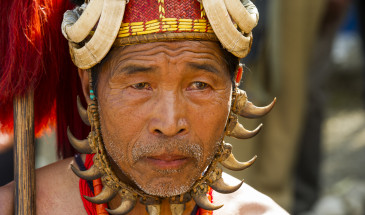 
Hornbill Festival 2020 – also known as the “Festival of Festivals” – will happen from the 1st to 10th of december 2020 in Kisama Heritage village, near Kohima in Nagaland. Hornbill Festivall is undoubtedly the most popular tribal festival across North East India. This celebration is held every year on the first week of December.

Hornbill Festival is the best event to interact with people who are part of the tribes of Nagaland and exchange with them. Despite having been historically headhunters for some of these communities, they have now a immense sense of hospitality.

During the festival, a visitor gets the opportunity to catch a ring side view of all the Naga tribes, their culture and distinctiveness at one place. Hornbill festival gives visitors a closer understanding of the people and culture of Nagaland, and an opportunity to experience the food, songs, dances, lifestyle and customs of the Naga people.

More than Hornbill Festival, this itinerary will take you to the homes of the locals. You will visit Mon and Longwa where you will meet the Headhunters, Mokokchung the home of Ao tribe and the Lotha and Angami Tribe in Tuophema.

Embark for a wonderful experience in the lands of the Nagas !

Organized by the State Tourism and Art & Culture Departments, Hornbill Festival showcases a mélange of cultural displays under one roof. It is held at the Naga Heritage Village, Kisama which is about 12 Km from Kohima.
All the tribes of Nagaland take part in this festival. It is a convergence of 17 Naga tribes who come from different parts of the state of Nagaland to showcase their culture and traditions. Though each of these tribes celebrates their separate festivals, Hornbill festival acts as a coming together of their inter tribal culture and heritage. The festival also helps in reviving the traditions and customs of the tribes of Nagaland. The colourful festival has myriad cultural performances, sporting activities and traditional arts on display. This festival also gives an opportunity for visitors to explore Naga cuisine and flavours.

The aim of the festival is to revive and protect the rich culture of Nagaland and display its extravaganza and traditions. Over the years, the Hornbill Festival has grown to encompass the Hornbill National Rock Concert, which attracts bands from all over India to compete, and a night market. The Heritage complex consists of a cluster of seventeen indigenously designed houses (also called Morung meaning Youth Dormitory), each representative of a different tribe.

This festival is a great occasion to witness the diversity of Nagaland cultural heritage carried by the numerous tribal communities of the State. By assisting Hornbill Festival, one will be immersed in their tribal culture : Folkloric dances performed by the tribes of Nagaland, typical Naga food served by many stalls, rice beer (and other cereals), traditional handicrafts, contests and activities …

Welcome at the airport and transfer to Dibrugarh. Night in hotel.

Post breakfast we drive to Sibsagar to visit the Ahom monuments and temples which encompass the 600 year old history of the Ahom Dynasty. After crossing the Assam-Nagaland border, you encounter some hilly terrain. Night in basic guest house.

After breakfast visit Longwa Village, bordering India and Burma, situated about 50 km from the district headquarters of Mon. It is one of the biggest villages in the district, some portions of this village lie in India and some in Myanmar. However, it is controlled by a chief known as Angh. Half of the house of the chief falls in India and the other half in Myanmar. The lucky villagers enjoy two citizenships, one of India and the other of Burma. It is the place where coal mine was discovered in 1907. A visit to the village will acquaint you with the culture of the tribe. They are skilled in making exquisite handicrafts. Later on visit the Shanhah Chingnyu village, where still you might find human skulls kept as a head hunting trophy. Later return to Mon Village. Night in resort.

After breakfast, drive to Mokokchung, home of the Ao Tribe. Night in basic hotel/guesthouse.

Drive to Tuophema Village. En route visit Wokha, the Lotha and Angami tribe belt. The time in the afternoon can be used for the exploration of the hamlet, especially the stone from where the villagers are known to take their designs for shawls and baskets. For a well spent evening, you can observe the cotton spinning by the local women along with traditional music and songs of the state. Night in the traditionally built cottages.

After breakfast, witness the traditional cultural show performed by local people. Later depart for the Khonoma Green Village situated in the midst of pine trees. Night in hotel.

After breakfast drive to Kisama Heritage Village to witness the Hornbill festival. Whole day at the festival. Drive back to Kohima for night stay. Night in hotel. Kisama (Naga Heritage Village): the Hornbill Festival is a major event that take place within the confines of this heritage village that is about 12 Km from Kohima. It is a yearly feature held from 1st to 10th of December, where a visitor gets an opportunity to get a ring side view of the richness and uniqueness of the Naga heritage, its people and culture.

After breakfast, drive to Jorhat where you can enjoy a guided visit to a nearby factory, followed by a tea tasting tour of the different grades of tea produced in the factory or the Gibbon Wildlife Sanctuary or visit some nearby villages to observe the simple and sustainable lifestyle of the Indian countryside. Later in the evening, a cultural dance performance can be organized if there’s a group of more than 4 persons. Night in hotel.

Transfer to Airport (according to your flight schedule). End of our services.