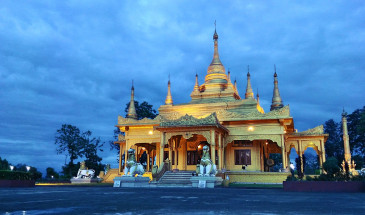 
The largest state of northeast, Arunachal Pradesh is a serene land tucked into the north eastern tip of India. It is bordered by Assam in the south and Nagaland in the south east. Myanmar forms the eastern boundary whereas Bhutan occupies the part west of the state. To its north lies the Mc Mohan Line separating it from the People’s Republic of China. Around 13 % of the population (which is 1,091,117) of Arunachal Pradesh follows Buddhism. The Buddhist population of the state resides in the region Tawang, West Kameng, remote regions in close vicinity of Tibet and near the Burma border. Tibetan Buddhism is practiced in the first two regions while Theravada Buddhism guides the life of people living near the Burmese border.

You will start this tour by discovering an old Burmese settler tribe called Khamti/Hkamti. This people are very strong believer of Theravada Buddhism.

The tour gradually changes to Tai Phakial culture (the Tai words ‘Pha’ meaning wall and ‘Ke’ meaning ancient or old). The Phake is also known as the Phakial as they migrated from Thailand to Assam in the 18th century and speak Thai language. Even during the modern time they still follow their traditional culture. They have a fine tradition to keep their family record (Ho Likboi), generally the elder of the family known as the Pathek is well versed prepare the record. There is a Buddhist monastery in Namphake village established in 1850. The monks (Chow Moun) also speak the Pali language. The residents claim to be 100% literate. One interesting fact is that the villager claims the police had never entered the premises because the monks settled the disputes among the villagers. They also rely on herbal cure. They marry within their community only but there is no restriction if someone wants to marry an outsider. It is a patriarchal society. The son inherits the father’s property. In spite of an identity crisis, the Tai Phakes have been able to maintain their glorious legacy.

You will then get to know the Mahayana culture by exploring the beautiful and small town of Miao, located on the bank of Noa-Dehing River, where a Tibetan refugee settlement produces on the best colorful woolen carpets of various designs.

Finally, this holy journey leads you to Tawang – the land of the Monpas; a tribe that has a culture which is a mix between indigenous beliefs and Mahayana Buddhism.

Having many names, such as The Hidden Paradise and Land of Snowy Mountains; the region offers breathtaking mountain landscapes, tribal villages, treasures of many rare orchid species, numerous magical Gompas, serene lakes and many other mysteries.

But more than anything else, it is the presence of that purity that only Buddhism offers. Numerous holy monasteries make this region a sacred environment. The second largest Buddhist monastery of the world, the Galden Namgey Lhatse Monastery (translated as ‘celestial paradise in a clear night.’), is situated right at the heart of Tawang town, dominates and enlightens the entire landscape with an aura of spirituality.

This itinerary gives you a single opportunity to explore Buddhism sanctums where you will find diversity in unity. Here, people from different Buddhist live in such harmony and celebration of each festival make the area very special.

Welcome at the airport and transfer to Tinsukia. Evening at leisure. Night in hotel.

After breakfast, road to Miao. At the border, clear the formalities to enter Arunachal Pradesh. On the way, visit of Chongkham, Namsai Buddha Vihar, Manmow Buddhist monastery and the Golden Pagoda. Continue to Miao Night in circuit house.

After breakfast drive to Namphake village in Assam. This laid back village on the banks of the Bura Dihing is inhabited by the Tai race of people believed to be the original descendants of the Ahom kingdom. During our stay we will learn about the unique Buddhist culture being preserved by this small community. Night in Eco camp.

Today, you will go for two jeep safaris that will take you inside Dihing-Patkai Wildlife Reserve. Along with a few mammals, the reserve is home to many exotic birds and flora. Rest of the spend interacting with the people of the Tai-Phake Tribe. Learn about their unique culture and way of life. Night in Eco Camp.

After a leisurely breakfast, leave for Dibrugarh. Rest of the day will be free to explore Dibrugarh town on your own and just relax. The town with all the amenities will provide you a refreshing feel. Night in hotel.

After an early breakfast, leave for Nameri NP. En route, visit the Ahom monuments and temples at Sibsagar which encompass the 600 year old history of the Ahom Dynasty. Night in Eco Camp.

After breakfast, we go to Dirang. In Bhalukpong, which is the border between Assam and Arunachal Pradesh, we will ask permission to enter Arunachal. En route, stop at Tipi to visit a greenhouse of orchids with more than 7,500 flowers. We will also stop in the temple of Nag Mandir in Dedza. Visit the village inhabited by the ethnic Rupa of Shertukpen. Lunch at Bomdila and will continue to Dirang. Night in hotel.

After breakfast, visit the hot springs of Dirang and then drive to Tawang, the birthplace of Mahayana Buddhism. On the way, you can visit the quiet Nyukmadung Village. To reach Tawang, you will go through the Sela pass (4170 m). Night in hotel or guest house. Option: Bailey Trail Trekking (8 to 11 days) or Nagigi Trekking (8 days)

Walk for 30 minutes from the market in Tawang town and enter the Tawang monastery compound. Founded in AD 1680, Tawang Monastery is the largest Tibetan Buddhist monastery in India. Situated at an elevation of 3300 meters, the mesmerizing Buddhist citadel comprises 65 residential buildings which are home to 450 lamas. A centre for Buddhist cultural studies and a library with an invaluable collection of 400-year-old manuscripts are also found inside the compound. Also pay a visit to the museum and butter lamp house. Visit a craft center and emporium and shop for authentic woven goods and garments. Drive to the outskirts of Tawang town and visit Urgelling Monastery which was built around AD 1487. Almost two centuries later Tsangyang Gyatso, H.H. the 6th Dalai Lama, was born here in 1683. Pilgrims can burn incense and perform a candle lighting ceremony in which conical terracotta lamps are used. Next visit Khinmey Gompa which will impress with its kaleidoscope of glorious colors. Drive back to Tawang town for lunch. Visit the Ani Gompas or nunneries of Tawang are steeped in the same time-honoured Tibetan Buddhist traditions as their larger all-male counterparts. Night in hotel/homestay. Option: Explore villages around Tawang by walk (2/3 days)

After breakfast, we go to Bomdila. En route we pass Nuranang Falls, the memorial of Jaswant Garh (in memory of the Indochina war) and the Dirang Ta Dzong (Tibetan old prison). Night in hotel.

Road to Balipara where we arrive for lunch. In the afternoon, visit a tea garden and factory to see how tea is processed. Night in resort.

After breakfast, transfer to Guwahati. You can visit Guwahati State museum to know the other tribes and cultures of Assam. In the evening, you can enjoy a cruise on the Brahmaputra (optional). Night in hotel.

After breakfast, transfer to the airport. End of our services.