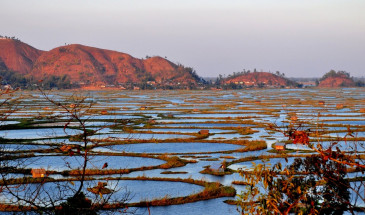 
Want to experience the thrill of crossing over what is perhaps India’s most exciting and under-explored international border or of visiting the place where South Asia meets Southeast Asia? Discover the border town of Moreh (110 Km from Imphal) and cross over into Tamu in Burma (Myanmar) to see its bustling bazaar, friendly people and main Buddhist monastery. You top it all off with a delicious Burmese meal! As if that wasn’t enough, en route near Tengnoupal you enjoy stunning views from the road at 1700 m of the mountains that form the India-Burma border. En route you can see the Shenam Saddle where some of the most ferocious fighting of the WWII took place between the British and Japanese soldiers.

This tour has as its main destination the breathtakingly beautiful Loktak Lake, the largest freshwater lake in North East India. You can get a bird’s eye view of the lake from the Sendra Island. You stop en route at the Second World War battlefield of Red Hill where India Peace Memorial, the only Japanese Second World War memorial in India, is located. This tour also includes a visit of the Indian National Army (INA) Memorial Complex where the Indian tricolor flag was hoisted for the first time on the mainland. There is also the Keibul Lamjao National Park; the world’s only floating national park and the sole home of the endangered Sangai, the brow antlered deer also called ‘dancing deer’.

Welcome at Imphal airport and enjoy a half day guided tour of Imphal city which will cover the famous Women’s market, the Kangla fort, RCKS Art Gallery, the Polo ground and the Imphal War Cemetery. Night in hotel.

In the morning, depart for Moirang. It was here that the flag of the Indian National Army was first unfurled on April 14th, 1944. Visit the INA Museum and the centre of Meitei folk culture. Later continue to Keibul Lamjao National Park which is the only floating National Park in the world on the Loktak Lake. Relax at Sendra Island. Road back to Imphal. Night in hotel.

Transfer to Imphal airport. End of our services.